YOLO JAPAN conducted a questionnaire to find out which ingredients and flavors foreigners prefer. Based on their responses, a new menu has been developed ~ The new menu is now being served at the restaurant in 'YOLO BASE', an inbound working facility for foreign residents~ 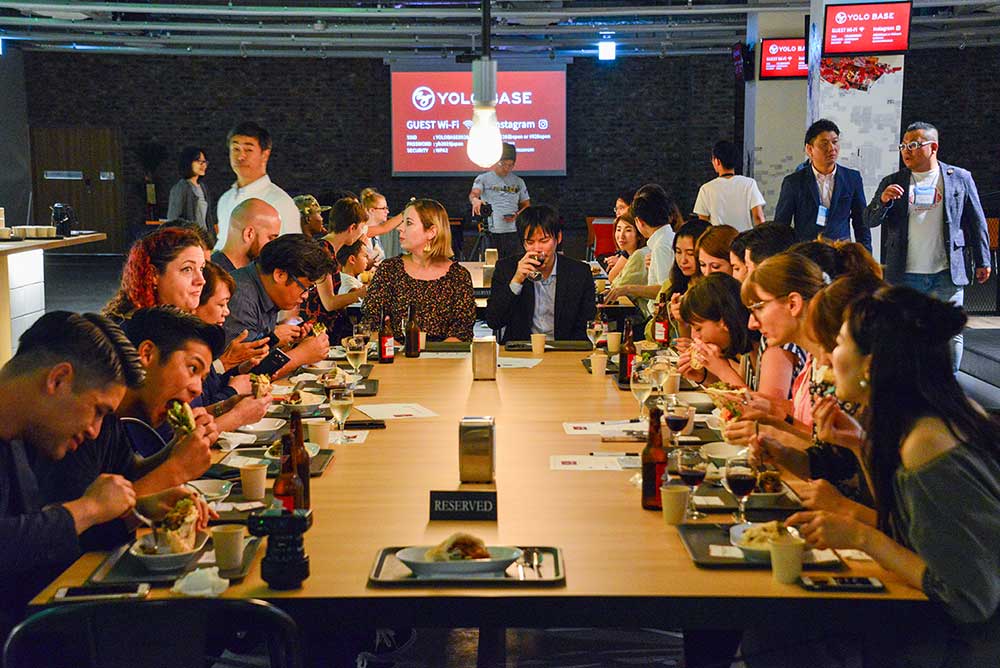 With the opening of the employment training facility 'YOLO BASE' for foreign residents, YOLO JAPAN Co., Ltd. will conduct a questionnaire and a food sampling event targeted towards YOLO JAPAN's foreign members. At the event, an announcement will be made about the creation of a new menu based on the opinions gathered from the survey. This new menu will be served at the restaurant inside this facility.

The concept of the restaurant inside YOLO BASE, which opened in Shin-Imamiya, Osaka, is 'A kitchen's journey around the world.' 98% of employees are foreigners, coming from over 20 different countries.

A questionnaire conducted before the opening of YOLO BASE collected responses from 331 people who came from 62 different countries. The No.1 ranked flavor was Teriyaki. Therefore, 'Teriyaki and Egg Pita Sandwich' has been added to the menu.

Flavors that ranked after first place, such as garlic, chili pepper, and miso flavor, will be used as a secret ingredient and for a new sauce. Mitsuru Sekine, the restaurant manager said, "Because many were worried about their smell after eating garlic, we weren't planning to use garlic, but since many of our foreign members said that they preferred having garlic in their dishes, we have used garlic as a secret ingredient for YOLO Curry and for our different sauces. Additionally, as a new taste for YOLO Noodles, we have added Miso Butter Corn Ramen, we also have a secret ingredient inside the breading of YOLO Chicken (fried chicken), and we have added a new flavor and chili pepper to our french fries".

YOLO Chicken Curry will be served in our lunch menu

Also, because we found out that many wished to have mushrooms, tomatoes, and cucumbers in their pita sandwiches, from now on, we will do our best to include these ingredients when thinking up a new menu.

As for beverages, according to what people wanted to drink we have added 5 more soft drinks to the menu: Ginger Ale, Melon Soda, Mineral Water, Matcha Latte, Coca Cola.

At the food sampling event, in addition to the Japanese-style rice bowls such as the 'Japanese Style Nori-Bento (seaweed lunch box) Rice Bowl' which is made with deep-fried fish sausage and seaweed, we served dishes such as 'The Sauce Flavored! Rich Takoyaki and Yakisoba Osaka Sandwich,' a pita bread filled with takoyaki and yakisoba with plenty of Otafuku Sauce, and the Korean-style pita bread filled with Bulgogi beef and namul called 'Beef Bulgogi Namul Sandwich.' As a result, the following comments were received from participants.

"Yakisoba sandwiches are already sold at convenience stores, but there are no takoyaki sandwiches, so I thought it would have been better if the Yakisoba Takoyaki Sandwich had just takoyaki in the sandwich"
(Brazil, male, 30s)

"Since Osaka has a lot of Asian-style restaurants, if you have a menu of 100 different kinds, then I think more foreigners would visit if there is a menu where they can enjoy dishes from unique countries."
(Canada, female, 20s)

"I'm a vegetarian, so I was very happy to find a pita sandwich for vegetarians and soy meat rice bowl. Everything was wonderful and the taste was fantastic."
(Belarus, female, 30s)

"I love pita bread, I thought that the combination of my favorite bulgogi inside the pita was very good. I thought it was great."
(Philippines, male, 30s)