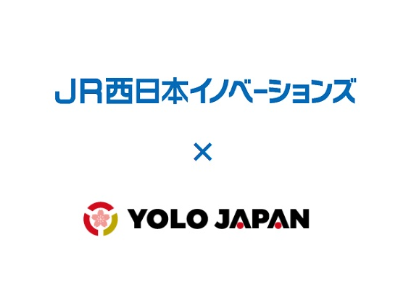 YOLO JAPAN Ltd., (CEO: Taisuke Kaji, Tokyo Headquarters: Minato-ku, Tokyo; hereinafter "YOLO JAPAN"), which manages the largest media in Japan with more than 150,000 registered foreign residents from 226 countries, has issued a third-party allotment to JR West Japan Innovations, Inc. (Kita-ku, Osaka, President: Hiroshi Wada, hereinafter referred to as "JR West Japan Innovations"). Together, the objective is to promote the utilization of foreigners in the JR West Japan Group and build an easier environment for foreigners to live and work.

In response to the declining work force and increase of foreigners living in Japan, our objective is to create a richer future for Japan through the expansion of the employment of foreigners. With this in mind, we are managing media that lists jobs targeted towards foreigners. In less than 4 years since the service was launched in April of 2016, the number of registered users has reached 150,000 people.

In order for foreigners to work longer and reside for a longer period in Japan, we feel that it is imperative to create an environment that is easy for them to work and live in. As it is difficult for the human resources department in a company to provide support to all of their foreign employees, together with JR West Group, we will jointly develop and market a lifestyle support service for the benefit of foreigner workers.

■Contents of the Lifestyle Support Service

New jobs through Academia! We have started posting jobs for 'writers'